I know I’m totally messing up the weeks, but I wanted to write about what we did today!

Algebra 1 – We’ve been working on Exponential Functions this chapter, and it is amazing how CPM has it laid out. I was talking with Karen, who teaches one of the Algebra Honors classes, about a problem we’d done in class and she said they didn’t do anything like that in Honors. She said, “This could be a Performance Task for Honors!” (she likes the CPM problems), and it totally could. A regular problem for our class is extraordinary for the Honors Alg kids. The last couple of days we were “curve fitting” given 2 points of the exponential curve….not right next to each other. Initially we did it using a table, then we did it by substituting in the values of x and y into 2 equations, solving the equations for “a”, then setting the equations equal to each other and solving for “b”. Then we substituted the “b” value back into one of the original equations, found the “a” value” and wrote the equation. Today we went over one of the homework problems where they had to do the above method, then also solved it using the table. We ended up having to find the 4th root of 0.0256, or we just used rational exponents and raised 0.0256 to the 1/4 power! It was so cool. Today the lesson was solving a system of equations of exponential functions by graphing. It was about 2 cars that were depreciating in value and one that was appreciating, and which should we buy. We’ll finish it tomorrow. It’s so different, and so cool!

Math 7CP – Last week we finished up our Percents Unit. I made a Math Notes page (to copy the phrase from CPM) to sum everything up, and a few problems for practice. I told the kids they could use the Math Notes page (it’s not called this on the paper) on their test. I liked it a lot, I’m not sure if it helped though…. they either know it or they don’t, and I saw errors that wouldn’t have occurred if they’d looked at it! Today we played Grudge to review for our Trimester 2 Benchmark. The Benchmark is so basic compared to what we’ve been having our kids do….so hopefully they do well! That will be on Wednesday, and then I think we may do a Performance Task on Thursday – or we’ll do puzzles! This is the Puzzle HW we are doing this week.

Math 7 Accelerated – Last week we reviewed and had our Chapter 6 Test. We had the kids do a Concept Map tying all of the vocabulary together for this chapter. What I love about this as a review activity is the kids don’t just link the vocabulary words together, they have to write WHY they are connected! Here are some pictures:

Above shows the kids working (I just noticed they’re actually right next to each other, notice the boy with his hands on his head? hahaha) and below are my favorites: 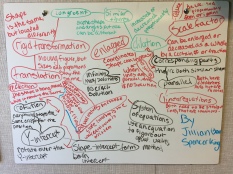 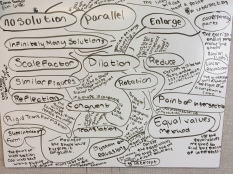 I haven’t finished grading the tests yet (lazy this weekend) but I’ll finish them tonight.

Today we did Robert Kaplinsky‘s Ms. Pac-Man! Ideally we wanted to do it as a review activity BEFORE the test, but we had an assembly and a Rally and class times got messed up so we would have had to test tomorrow, and Tuesdays are short days (39 min periods) so we just decided to do it after the test. Here is the link to where I wrote about it originally, and here is the link to the game board, which I apparently didn’t link to when I wrote about it. I also played Mario Music while the kids were working! We’ll finish it tomorrow, but here are a few pictures of today. Most kids figured out their route before writing out the moves. It definitely went better this year than the first time we did it last year! 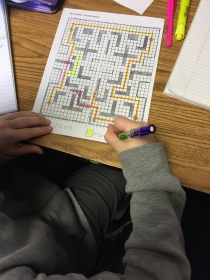 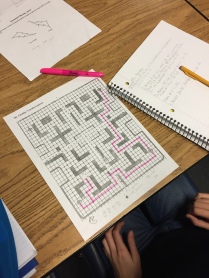 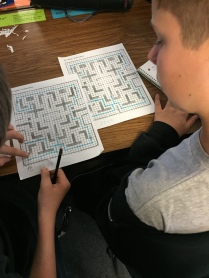 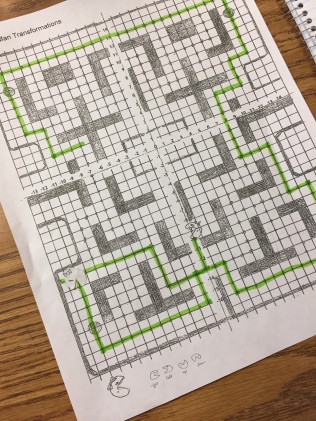 I teach middle school math in Thousand Oaks, California. I love my job! When I'm not teaching, or thinking about teaching, I love to ride horses, read, take Zumba classes and be with my family and friends.
View all posts by debboden →
This entry was posted in Equations, Percents, Systems of Equations. Bookmark the permalink.