I LOVE Robert Kaplinsky. Okay, I like him a lot, but I love his lessons! I read Brian Miller’s post on how he implemented Robert’s lesson “How did they Make Ms. Pac-Man” and decided we needed to do it too. I copied Brian’s game board, and enlarged it to fit on a page.

I colored in the dots darker so they were easier for me to see, and added his drawing of how Ms. Pac-Man must move to the bottom of the page. (I actually just did this for the post – it’s something I didn’t do but should have! I also made a page of Ms PacMan markers for activitry and cut the squares out for the kids. The kids cut out the shape, and DREW it again on the BACK. This was really helpful, since she reflects!

We watched the videos from Robert’s Post a few times (like Brian suggests) and then all did a sample set of moves together. (Okay, I didn’t do this the first time and it was a big mistake – the kids 1) missed how Ms. Pac-Man needed to face the proper way and had her orientation wrong sometimes, and 2) didn’t understand how the lines worked with reflections, since we’d mainly reflected over the x- or y-axis. So they would write “reflect over x-axis, x=8”, when they really were reflecting over y=5, but at the point (8,5). I realized I hadn’t done enough reflecting over lines other than the axes, so they thought every horizontal line was an x= something because of the x-axis. Another thing to do better next year!) My suggestion would be to use half of the page as a sample. Everyone started at the same place with the goal of getting the most dot points (small = 1 pt, large = 10 pts) in 20 “moves”. Most kids highlighted their routes. I defined a “move” as what you had to do to end in a translation. So some rotated about a point, then translated; others rotated, reflected then translated, but they all had to write down the point of rotation, the line they reflected over, and the translation for each move. I found out my teaching partner had made each transformation a separate “move” so her kids didn’t travel as far as mine did (initially) but we were on the same page for the quiz (yep, we had them do 10 moves on the quiz!). 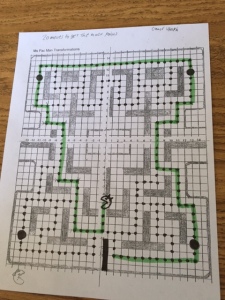 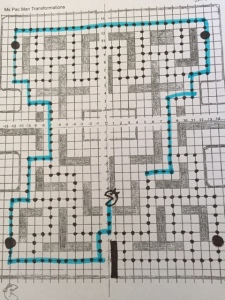 One of my boys had a “finished” game board, with a number written on it. I’m like, “what’s that number?”, Boy “my total points”, Me “where are your moves?”, Boy “oh I did it in my head”, Me “yeah, well now you get to write them all down”. He ended up doing it about a month later when his mom started getting on him for missing work. They need to WRITE ALL OF THEIR MOVES!

Things I wanted to do but didn’t, but will next year:

1) I wanted the kids to trade “moves” sheets and get a new game board and do the moves and then compare game boards to see if the moves generated identical boards. Didn’t “have time”. Will make time.

2) Didn’t make sure the kids were really understanding how Ms. Pac-Man needed to face as she moved. We started better in my second class, but next year I will have kids come up and do some sample moves on their board with the doc camera. Brian did this on the board with his kids and THAT’S A GOOD IDEA!

3) Maybe figure out how to quiz it better. My partner and I used the top half of the game board and traced a route with highlighter (which I had to do again, since it didn’t copy dark enough…) which would take 10 moves. We wrote how we would do the moves, for our quiz key. Didn’t think about the VARIETY of moves the kids could do. We knew there could be some differences, but THERE WERE A LOT! So we decided to pass out the quizzes to the kids to correct and I read what I thought the move should be, and if there were differences the kids read it to us and I moved Ms. Pac-Man along to see if it was correct. This worked pretty well in our Advanced classes, but I don’t think it’s the best way to correct them. And with 70 kids I didn’t want to do all 700 moves to correct each one (you know what I mean)! So if you have a suggestion, please let me know because I do like having it on the quiz – I loved seeing all the different thoughts, some were much more efficient than mine!

A few weeks later one of my girls wore this t-shirt to school. I asked her if I could take her p

icture – I really want the shirt!

I think the most important things to do are: give the kids the game board markers to use and draw Ms. Pac-Man’s orientation on the board so it is obvious. Also, to have the kids do each other’s work – but I’m thinking this should be before the 20 moves…. have them do 5 or 7 moves then  “check” each other. All this reflection should make next year’s Ms. Pac-Man even better!  A HUGE Thank You to Brian Miller and Robert Kaplinsky for this awesome lesson.  And to the MTBos!

I teach middle school math in Thousand Oaks, California. I love my job! When I'm not teaching, or thinking about teaching, I love to ride horses, read, take Zumba classes and be with my family and friends.
View all posts by debboden →
This entry was posted in Transformations and tagged 8th grade, Ms. Pac-Man, Robert Kaplinsky, Transformations. Bookmark the permalink.